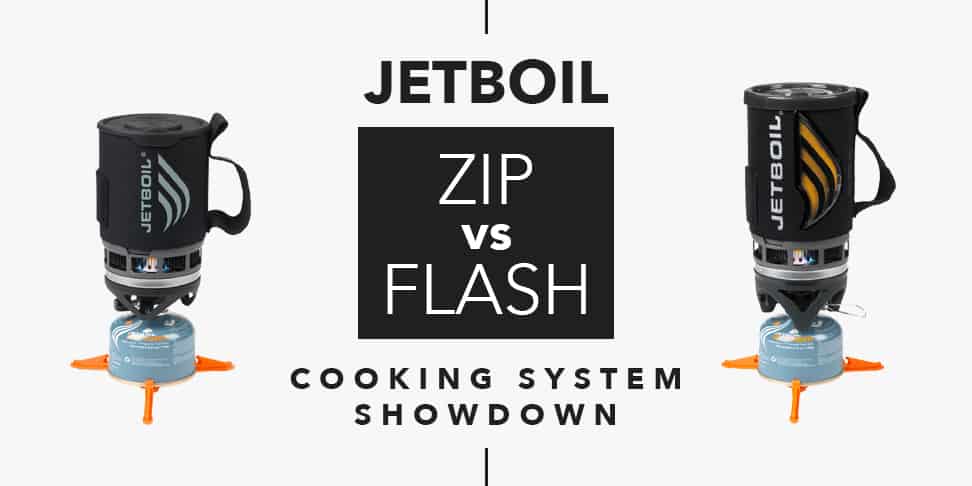 Jetboil specializes in dependable stoves that are light to carry, quick and easy to set up and get water from cold to boiling in minutes.

But which is better?

Well, this is really down to personal preference, one is lighter and more compact, while the other boils water quicker but uses fuel faster too.

So, let’s have a look at both of them and what they can really do…

The below links will bring you to Amazon:

This is the cheapest camp stove that Jetboil make and costs around 80 bucks.

For that, you can make hot food and drinks easily whenever and wherever you want.

Compact and light it’s great for its portability and not adding loads of weight to your pack.

The main difference you get with the Jetboil zip is its weight and size. You simply won’t find another stove that is this compact and can still boil water so incredibly quickly.

It also comes with a drink-through lid that has a little spout to pour liquid out with. This can be handy and is something you don’t get with all of Jetboils stoves.

Who should get this?

This is made for one or two people to use and is the lightest stove out there. If you want to keep your pack light or if you don’t want to fill up too much space this is undoubtedly the one for you.

Some other sweet features

2. Jetboil Flash Review — Fast and no waiting around

The fastest stove that Jetboil has ever made with a boiling temperature that is a whole minute faster this is really something special.

Changing many aspects of the design this has been engineered in all aspects to optimize efficiency, speed, and precision.

With a sturdy design and no loose parts, this is made to be used in a seconds notice. Quick to get up and running and quick to pack up and put away there’s no waiting around with this bad boy.

The speed at which it can boil water. 100 seconds is a truly incredible feat of engineering and is much faster than other stoves you can get.

It also has a new and improved life and an ergonomic design to make it comfy to hold and carry.

Who should get this?

If you don’t like waiting around this is perfect for you.

You can be walking along, decide you want a cup of coffee and in less than 2 minutes have a nice steaming brew in your hand. That’s pretty special.

Some other sweet features

What should you look for?

When buying a stove there are lots of different things to look out for but there are four qualities that are particularly important.

The size, the weight, the speed at which they can boil water and their fuel efficiency.

Finding the right balance between these is down to the user, what they’re using it for and their personal preference.

How to use the camping stoves 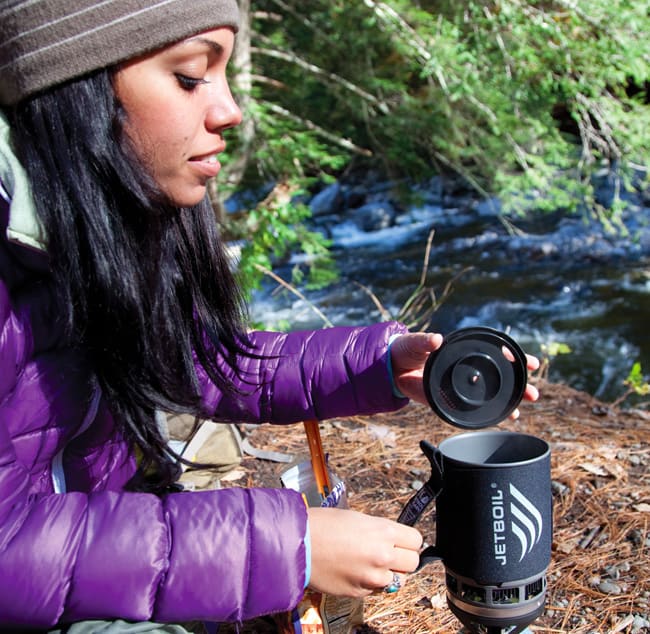 These are made to be quick and easy to use.

Simply connect the Jetboil base to the fuel canister and turn the fuel control valve while either pressing the igniter button or sparking your own lighter (depending on the model).

Next, take the plastic cover off of the base of the pot and turn it clockwise on the Jetboil base to securely attach it.

Adjust the flame as needed and get ready for a yummy meal or a satisfying brew.

What do they have in common?

Both are made in the USA, completely out of metal, and are the some of the best high-quality stoves out there.

They’ll both get you boiled water and are both super portable and compatible with all of the Jetboil accessorize.

Which of the two is better?

This really depends on what you want out of your stove. 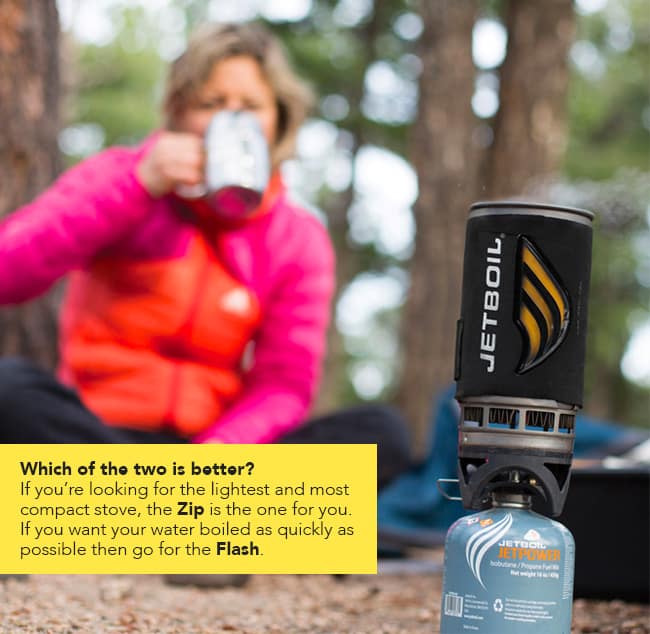 If you’re looking for the lightest and most compact stove and also value fuel efficiency then the Zip is the one for you.

If, however, you don’t mind carrying a bit more weight and want your water boiled as quickly as possible then go for the Flash.

How much does a jetboil canister weigh?

With the 100g canisters which both the Zip and Flash stoves use their total weight is 194 grams when full and 94 grams when empty.

Can I replace the cup?

Yes! There are loads of different size and style of cups that you can easily replace the one on your stove with.

How do I pack a Jetboil?

They’ve been designed so each bit slots into each other simply and securely, so not too much space in your bag is taken up.

What are the available canister sizes?

What is the difference?

There are three main differences between these stoves.

What fuel do the stoves use?

Jetboil has there own jet power fuel which is used with their stoves. Consisting of high-performance propane/isobutane it’s a reliable fuel source that works even in coke or humid weather conditions.