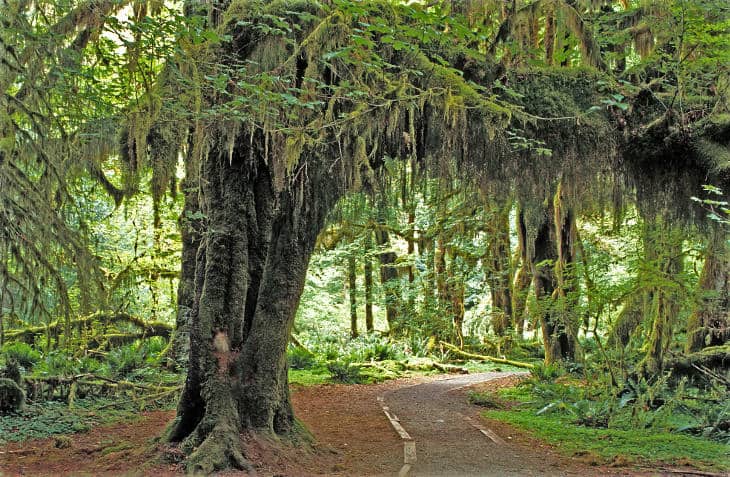 Washington State isn’t often considered to be one of the most ecologically diverse states of our country. Nestled into the top northwestern corner of the United States, it often gets passed up on for other supposedly more exotic locations for hiking.

The difference between eastern and western Washington are so striking, however, that it might feel like you´ve travelled across the world after a short 5 hour car drive. From the lush Cascade Mountains and the Hoh Rainforests in the western part of the state to the dry, wheat fields and prairies of the eastern part of the state, Washington offers a number of uniquely different ecosystems and environments.

A fantastic vacation idea would be to start in the Spokane area of eastern Washington and drive all the way to the Pacific Ocean. Along the way be sure to check out some of these awe-inspiring day hikes.

The Blue Mountains in the south-eastern part of Washington aren’t as famous as their western counterparts, but they still have plenty to offer. The ridgeline trail that goes through the Wenaha-Tucannon Wilderness will take you to a beautiful overlook. On a clear day you will be able to see down into the valley of wheat fields and open spaces.

There is something undeniably magical about mountain lakes, and the Tolmie Peak Lookout stairs down into the pristine Eunice Lake which shines like a sapphire amidst an emerald green softwood forest.

Located near Mount Rainier National Park, this simple day hike will offer you beautiful views of one of the most iconic peaks in the state of Washington while also taking you up to almost 6,000 feet elevation.

Mount Saint Helen´s might not be as active as it was a couple of decades ago, but this trail in the South Cascades region offers you a pretty unique experience. You will be able to take in pretty cool views of the old volcano itself while also appreciating the roaming herds of elk.

The South Coldwater Trail rambles through treeless valleys which still give testament to the power of destruction that Mount Saint Helens caused. At the same time, the renewed landscape filled with wild flowers speaks to the power and resiliency of the natural world.

In the northern part of the Olympic Mountains you can find a unique trail in Sunrise Ridge. This trail which is within Olympic National Park is a wildflower-lover´s delight. If you time it right you will find field upon field of every type of wildflower including lupine, larkspur and everything in between. This is also a great trail to come upon all sorts of wildlife.

Walking through the lush greenness of the Hoh Rainforest Trail is an experience unlike any other. Monstrous trees hung with thick moss and the unending song of hidden birds will make you feel like you´re in another country. The relatively open understory allows you to truly take in the beauty of America´s only rainforest.

While many people might think of the beach as a place to relax on the sand, the Pacific Coast of Washington is a perfect place to explore sea side cliffs and forests. The Rialto Beach and Hole-in-the-Wall offers a short 4 mile loop trail that is coastal hiking at its best. If you´re lucky, you might even find some tide pools filled with starfish and other unique sea creatures

In the Central Cascades, Larch Lake trail offers one of the most secluded places you can get to in a day. This hike isn´t easy as you´ll gain over 2,500 feet of elevation in 12 round trip miles, but if you make it to the lake you´ll be greeted by one of the Cascades best kept secrets.

Hiking this trail in early fall is by far the best time as the azure glow of Larch Lake will contrast beautifully with the golden leaves of fall time.

A Must See: Spider Meadow

If you are in the Cascades Region, you will also want to check out Spider Meadow. A 13 mile round trip hike will take you through meadows and alpine highlands while giving you glimpse into the unique ecosystem of Glacier Peak Wilderness area.

Washington: So Much to See

Chances are that during your cross-state excursion throughout the state of Washington you´ll also come across dozens of other beautiful areas beckoning for you to stop and explore. You might not even be able to drive more than a couple miles without feeling the itch to see what´s over the hill. Exploring Washington State through these day hikes will offer you a glimpse into the natural beauty this state has to offer.