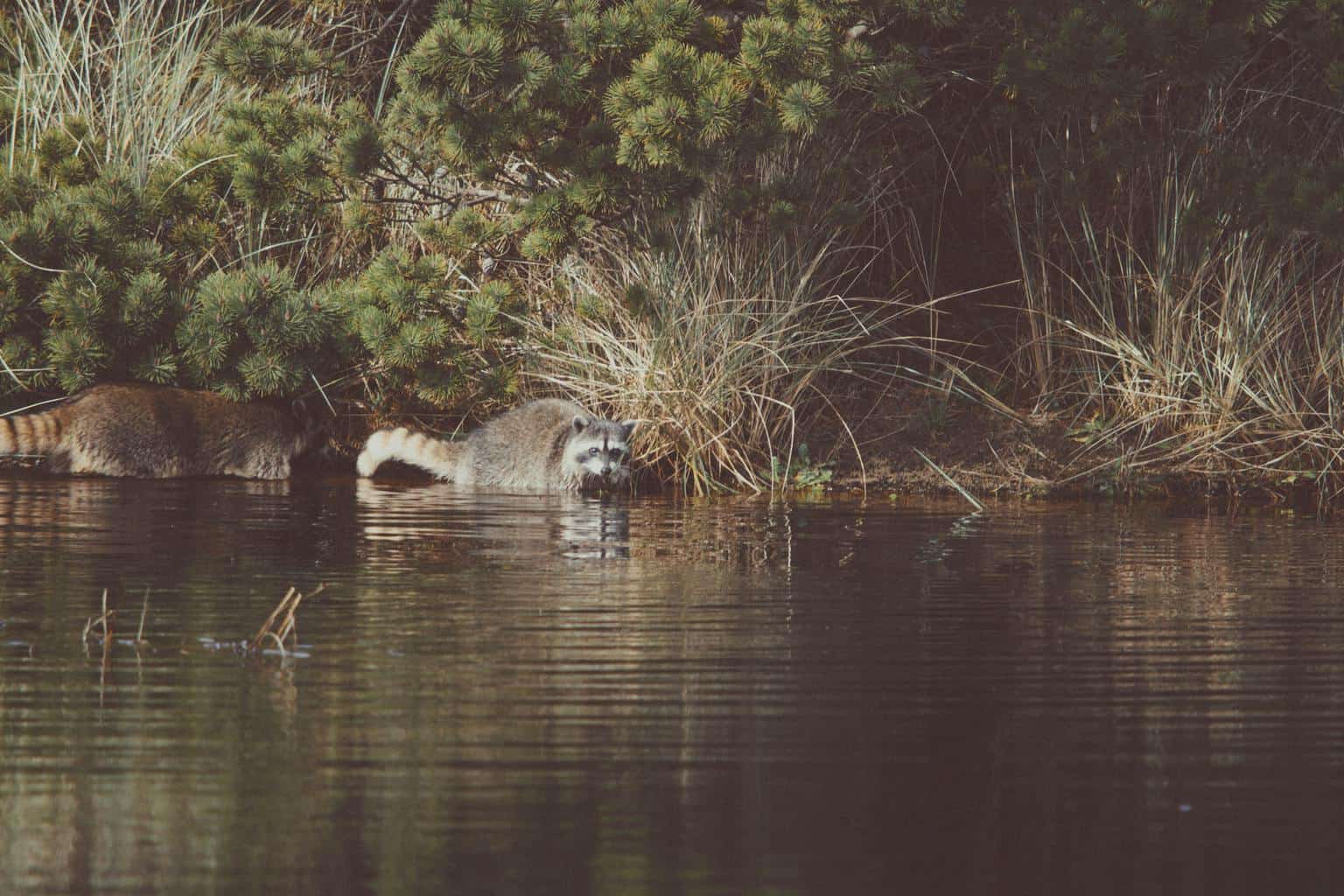 The North American raccoon is a vicious creature. Albeit small, this masked scavenger can weigh up to fifty pounds, has incredibly sharp claws, and razor-like teeth. In other words: any hunter, seasoned or otherwise, should not underestimate them.

Noted for their intelligence, raccoons are as savvy as they are fierce, and a general sense of their routines and habits is an essential component of becoming a successful hunter. The following list of raccoon hunting tips should help give even the novice hunter some fundamental insights into what they should know before getting started, when and where to find these ferocious little critters, how to track and lure them, and the best tools for getting the job done.

Like most animals, food is a great motivator for raccoons. They are most at home in densely woods areas (their natural habitat), where nearby streams provide a variety of food options and tall trees help insulate them from predators, though this seems to have changed significantly over the last hundred years. Since the 1920s, the raccoon’s adaptability has extended dwellings to also include cities and suburbs, where they have become quite the nuisance thanks to their propensity for trash foraging.

Like many smaller predators, they are largely nocturnal, often emerging in the evening hours to hunt and scavenge for food. Don’t let that fool you into thinking nighttime is the only time for hunting coon, however, as they will always take advantage of an available food source, even if it means venturing out of their dens during daylight hours.

Hardly selective in their dietary preferences, these little bandits have been known to ransack trash bins in the city and decimate chicken coops in the sticks, all in the name of a good meal. In fact, they are considered among the world’s most omnivorous animals, feasting on everything from insects to amphibians, chicken eggs, and all manner of trash.

The Bait & Switch: Using What You Know

Using what we know about this animal’s dietary behavior as a tool, successful trappers and hunters have been known to lure raccoons into their clutches with a variety of different bait. Some of the most effective items for enticing these food-motivated vermin include boiled eggs, marshmallows (yes, you read that right), and foods that give off a strong odor, such as canned cat food.

Go Ahead, Lose the Forest for the Trees

Although they have managed to make a home just about anywhere these days, raccoons tend to prefer the hollows of old oak and other trees, where an elevated position helps keep them safe from larger predators. When being pursued, they will often seek refuge in the limbs of trees, a term known to hunters as “treeing.”

They are also creatures of some routine. Although these nightwalkers have been known to abandon a sleep spot after only a single night’s rest more than 50 percent of the time, a recent study found that they also tend to return to spaces they deem safe, sometimes than ten times. So if you’ve managed to track a raccoon to its den, it might be worth the patience of waiting for him to catch some Z’s.

Some of the most popular urban habitats include attics and chimneys, where many a coon has been known to stow away. If this is your predicament, traps can come in especially helpful, as you will likely want to chase them from their lair before making your kill.

A Small, But Scrappy Mark

As mentioned before, these sneaky little critters are both wildly clever and incredibly dangerous, and both of these things should be seriously considered when hunting coon.

Gifted with incredibly dexterous front paws, which allow them to dig under shelters and unhook gates, a raccoon’s cunning is thought to surpass even that of the fox. They have been known to slips traps (and are especially good at jimmying locks), devastate flocks, and aggressively confront potential challengers. And in water—where they will sometimes run, when being hunted in the woods—raccoons have been known to pounce on the heads of pursuing hounds, drowning their attackers on the spot.

In addition to their flight-club mentality, raccoons also carry a host of diseases that can make coming in contact with them especially unpleasant. Not only are they considered one of the primary hosts of the Rabies virus in the United States, but they can also carry distemper (lethal to unimmunized dogs and cats) and an array of other parasites and bacteria. Close contact with them should absolutely be avoided at all costs.

Enjoyed by many hunters as a stopgap source of entertainment, time of year is central to a successful coon hunt, both legally and otherwise. The hunting season typically begins in September (just before deer season kicks off) and runs through February (about two months after deer hunting has completed).

It is important to note, however, that during especially cool temperatures, many raccoons will take a winter rest, significantly reducing their activity in an effort to conserve energy. The best time to find them out and about usually arrives in late January, as the days start to become longer and males emerge from their den in search of a suitable mate. “Squaller” calls, which mimic raccoon fight noises, can be an effective method for attracting males, but it’s worth remembering that they are especially aggressive and territorial during mating season, so be prepared to shoot when using such noises to attract these angry creatures.

Coonhounds are easily one of the best resources—next to a gun—to have by your side when hunting, and this is especially true when it comes to this hostile and clever animal. With their powerful ability to detect even the lightest scent, hounds are often released at night into a forest or field and allowed to scent out potential prey. Once they have located their target, they will emit a loud baying noise, indicating to the hunter that the coon is ready for retrieval.

Pro tip: Outfitting your rifle with ammunition specific to varmints or predators is a surefire way to guarantee each bullet hits with maximal impact. Additionally, a specialized scope can help improve the accuracy of the kill, specifically when hunting at night.

Like many pests their size, raccoons can be squirrely little targets, and all of the tools mentioned above should be seriously entertained, if you want to be successful in your pursuit. Assuming you are using a rifle as recommended, the best way to ensure an effective kill is to aim for either the head or the heart—two areas sure to cause lethal injury and the most humane way to dispatch a raccoon.

Which of the two you opt for is largely a matter of preference. Though the head makes for a smaller target, a headshot is most likely to stop the animal in its tracks, in the event you should need to take a second shot. Largely considered the cleanest and most humane way for killing a raccoon, the headshot is also the preferred method of most hunters.

If using a relatively powerful rifle (and the varmint cartridges), then a chest shot should do the trick just as well, provided the shot is a good one and there is no immediate risk of the animal making. The goal is, of course, to kill the animal as quickly and as humanely as possible. Knives are also an option, but generally not something we recommend, as the aggressive nature of a raccoon (especially when cornered or in pursuit of a mate) should not be underestimated.

If you’re planning to skin the animal for its pelt, weapon choice becomes ever more important, since you will want to effect your kill as cleanly as possible to avoid destroying the raccoon’s hide. This is yet another reason to consider a headshot whenever possible. Though raccoon pelts don’t garner much these days in the way of dollars, they can make for exciting taxidermy displays or a fun cap for your kid.

There is a lot to consider when taking up the sport of raccoon hunting, but perhaps the most important thing to remember is to take note of the hunting restrictions in your area. As most of us can probably attest to, raccoons are a nuisance all year long, but it is only legal to shoot them for a short portion of the year.

If you are anxious to get started with the hunt, community boards often serve as a good source for finding potential hunting ground, since many people find a head-to-head showdown with a raccoon to be an unfavorable situation—and will even go to great lengths (and cost!) to have them removed or exterminated. Furthermore, raccoons exist nearly everywhere in the States and have a tendency to create disturbances everywhere they go, so it is only a matter of time before you are sure to encounter one, and when you do, you should now be amply prepared.