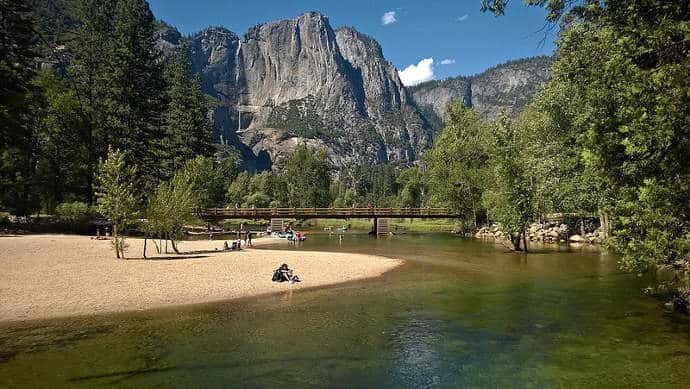 Things To Do In Yosemite National Park [All Seasons!]

Yosemite National Park is a national treasure located within California’s beautiful Sierra Nevada Mountains. Whether it’s the ancient, tall Sequoia trees or the granite cliffs of El Capitan and Half Dome, Yosemite offers a little bit of everything for the adventurous traveler who wants to explore a special part of the American West. The most important thing to keep in mind is when during the calendar year is the best time to visit Yosemite National Park? The answer to that question really depends on your own personal preference but there are both advantages and disadvantages to going during different months to Yosemite.

Most travelers to Yosemite National Park would consider the spring season to be the best time in which to visit due to the moderate climate and the fact that it’s not the high season for tourism yet.

When it comes to the month of March, it’s important to be aware that certain parts of the national park are going to be closed or unavailable. Tioga Road and Glacier Point Road are usually not accessible to the public during these months due to some winter snow that could be continuing. This means that Tuolumne Meadows and Glacier Point, two of the highlights of Yosemite, won’t be available to be visited starting at the beginning of March.

In April, while daytime temperatures are perfect during this month, it can still get chilly at night so make sure to bring a light jacket or sweater with you.

In May, everything in the national park is usually open, and the waterfalls during this month have their most volume and flow. Wildflowers and other forms of nature are blooming and it’s not as crowded as other times of the year.

It’s hot, hot, hot during this season for those visitors to Yosemite who are willing to bear the humidity, the long lines, increasingly crowded parts of the park. However, during the summer, the beauty and the scenery at Yosemite is at its’ peak and all parts of the park are open to visitors with no weather restrictions. However, if you plan to go on the weekend, be prepared for traffic jams and vacationing tourists crowding your space. You won’t have to worry about rain or snow, as Yosemite is mostly sunny during June, July, and August.

If you’re looking to go to the waterfalls in June, you may be disappointed as the volume and flow of water decreases rapidly starting in this month.

In July, daytime temperatures can reach peaks into high 90s – low 100s (Fahrenheit) so make sure you bring enough water to keep you and your family hydrated during the day.

While Yosemite Valley may be overly crowded especially during the month of August, to beat the crowds, you should check out Tuolumne Meadows during these months due to the lack of crowds, higher elevation, and beautiful views. In the High Sierra Mountains, there are many cool hiking trails to check out and explore.

A great time to see the changing colors of the leaves in your town or city is also a perfect season to drop everything and visit Yosemite National Park. Similarly to the spring, you won’t have to worry about large crowds spoiling your plans to visit every nook and crevice in Yosemite during the fall season. Temperatures during the day are also not as hot or humid so you won’t need to carry so much water to hydrate.

Because of the agreeable climate, September is considered to be the best month to go hiking or rock climbing in the park with the stable weather conditions. If you decide to hike higher than Yosemite Valley, Tuolumne Meadows is beautiful to visit as well during this time with cooler temperatures than the valley so remember to bring a jacket with you especially for the nighttime.

Unfortunately, in October, services on Tioga Road shut down for the rest of the Fall and all of Winter so that may be a drawback if you plan on visiting during this season.

The first snow to appear at Yosemite usually appears during October or November so be prepared for that possibility. The waterfalls also stop flowing so heavily and begin to trickle less and less during both October and November.

In the month of November, the fall foliage goes into full effect causing the leaves on the oak trees, maples, and dogwoods to show a variety of beautiful and awe-inspiring colors.

If you’re looking to go to Yosemite in the wintertime, then you are truly a brave traveler. While the winter season isn’t for everybody, there are still a number of advantages to visiting Yosemite during those months. The crowds are almost next to nothing during this time of year and it is very inexpensive to find accommodations there if you’re staying for a couple of days.

There are a number of winter activities to take part in starting in December such as figure skating, and snowshoeing. You can also head over to the Badger Pass ski area where you can take part in snowboarding, cross-country skiing and downhill skiing.

Unfortunately, starting in January, road access is completely restricted to popular parts of Yellowstone such as Tioga, Glacier Point, and Mariposa Grove due to the snowy and icy conditions.

You can’t really explore the whole park during the month of February but you can still have a good time in places like Yosemite Valley, Wawona, Hetch Hetchy, etc. Temperatures can reach below freezing during February so it’s important to make sure that you and your family bundle up to stay warm.

One of the best things about Yosemite National Park is that it stays open to the public year-round from the beginning of winter to the end of the fall. The park offers a little bit of everything to the average visitor is a wonder to behold. For more information about the best times of the year to visit Yellowstone, you should check out https://www.smartertravel.com/2008/06/26/yosemites-best-and-worst-in-every-season/ and https://www.tripadvisor.com/Travel-g61000-c167892/Yosemite-National-Park:California:Best.Time.Of.Year.To.Visit.Yosemite.html.

Want to know the Seven Amazing Things to See in Yosemite﻿? Make sure to check out our guide!